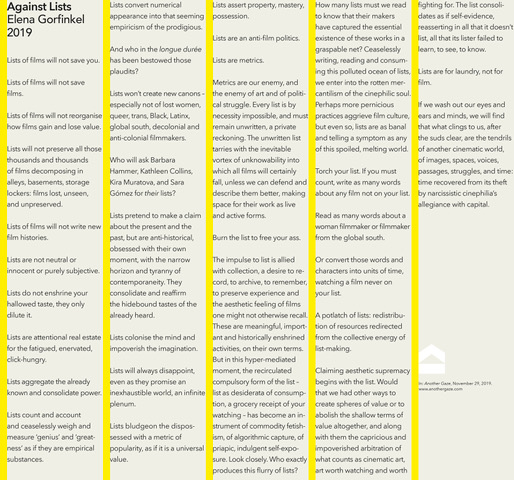 By Elena Gorfinkel
November 2019
in: Another Gaze

Lists of films will not save you.

Lists of films will not save films.

Lists of films will not reorganise how films gain and lose value.

Lists will not preserve all those thousands and thousands of films decomposing in alleys, basements, storage lockers: films lost, unseen, and unpreserved.

Lists of films will not write new film histories.

Lists are not neutral or innocent or purely subjective.

Lists do not enshrine your hallowed taste, they only dilute it.

Lists are attentional real estate for the fatigued, enervated, click-hungry.

Lists count and account and ceaselessly weigh and measure ‘genius’ and ‘greatness’ as if they are empirical substances.

Lists convert numerical appearance into that seeming empiricism of the prodigious.

And who in the longue durée has been bestowed those plaudits?

Who will ask Barbara Hammer, Kathleen Collins, Kira Muratova, and Sara Gómez for their lists?

Lists pretend to make a claim about the present and the past, but are anti-historical, obsessed with their own moment, with the narrow horizon and tyranny of contemporaneity. They consolidate and reaffirm the hidebound tastes of the already heard.

Lists colonise the mind and impoverish the imagination.

Lists will always disappoint, even as they promise an inexhaustible world, an infinite plenum.

Lists bludgeon the dispossessed with a metric of popularity, as if it is a universal value.

Lists are an anti-film politics.

Metrics are our enemy, and the enemy of art and of political struggle. Every list is by necessity impossible, and must remain unwritten, a private reckoning. The unwritten list tarries with the inevitable vortex of unknowability into which all films will certainly fall, unless we can defend and describe them better, making space for their work as live and active forms.

The impulse to list is allied with collection, a desire to record, to archive, to remember, to preserve experience and the aesthetic feeling of films one might not otherwise recall. These are meaningful, important and historically enshrined activities, on their own terms. But in this hyper-mediated moment, the recirculated compulsory form of the list – list as desiderata of consumption, a grocery receipt of your watching – has become an instrument of commodity fetishism, of algorithmic capture, of priapic, indulgent self-exposure. Look closely. Who exactly produces this flurry of lists?

How many lists must we read to know that their makers have captured the essential existence of these works in a graspable net? Ceaselessly writing, reading and consuming this polluted ocean of lists, we enter into the rotten mercantilism of the cinephilic soul. Perhaps more pernicious practices aggrieve film culture, but even so, lists are as banal and telling a symptom as any of this spoiled, melting world.

A potlatch of lists: redistribution of resources redirected from the collective energy of list-making.

Claiming aesthetic supremacy begins with the list. Would that we had other ways to create spheres of value or to abolish the shallow terms of value altogether, and along with them the capricious and impoverished arbitration of what counts as cinematic art, art worth watching and worth fighting for. The list consolidates as if self-evidence, reasserting in all that it doesn’t list, all that its lister failed to learn, to see, to know.

Lists are for laundry, not for film.

If we wash out our eyes and ears and minds, we will find that what clings to us, after the suds clear, are the tendrils of another cinematic world, of images, spaces, voices, passages, struggles, and time: time recovered from its theft by narcissistic cinephilia’s allegiance with capital. 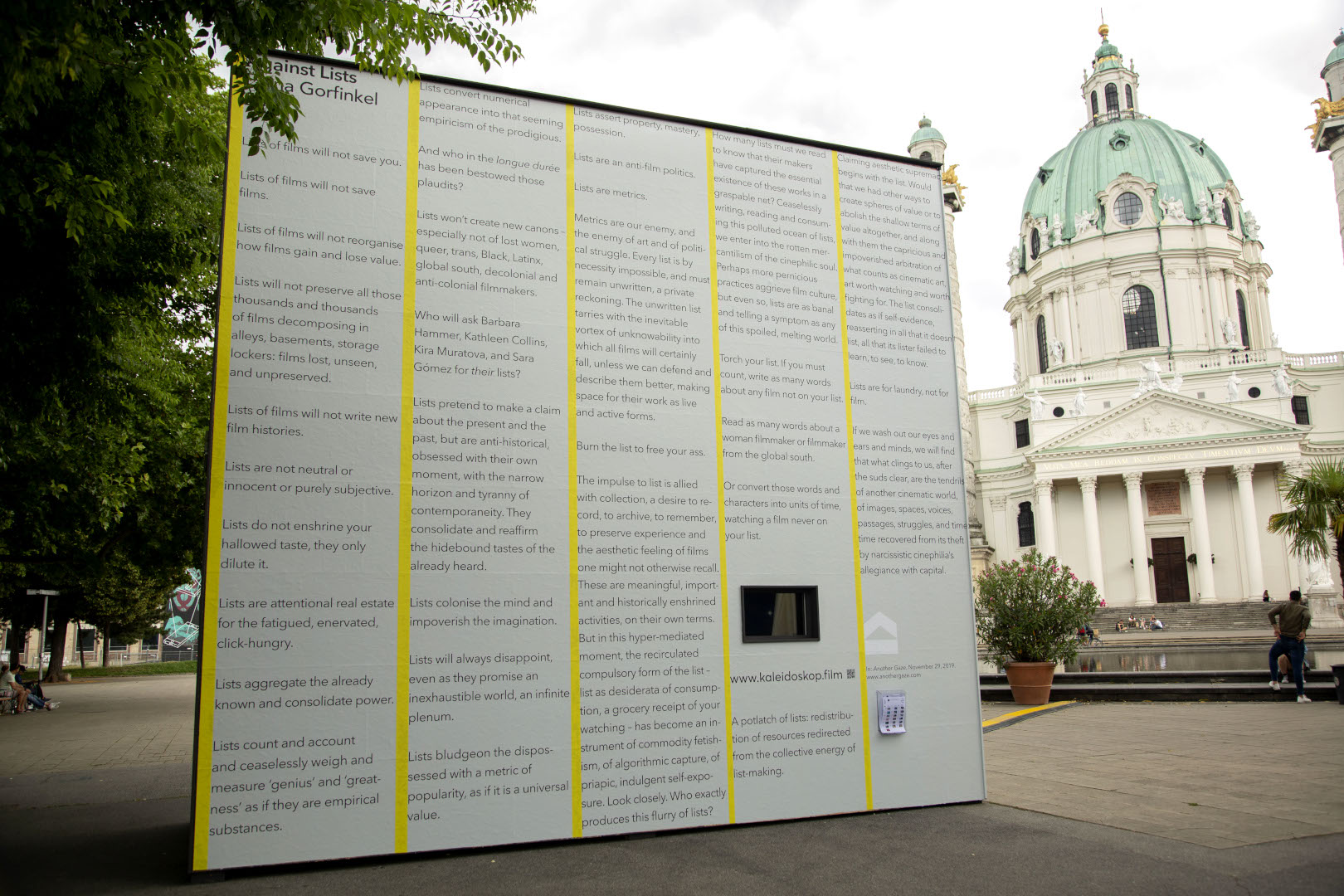