Relational filmmakers do not make films about people.

Relational filmmakers do not interview subjects.

Relational filmmakers have conversations with other people.

Relational filmmakers do not make films for arbitrary groups of people.

Relational filmmakers do not know what the final film will look like.

Relational filmmakers make formal decisions that address the aesthetic, ethical, technical, and personal problems encountered throughout the making of the film.

Relational filmmakers do not adhere to established modes or conventions.

Relational filmmakers make films that are abstract, factual, and fictional, all at once.

Relational filmmakers do not fuck around with these tools of representation and power.

Relational filmmakers use their tools to experiment with new ways of being and to emancipate new forms of subjectivity.

Relational filmmakers believe that reality is the consequence of what we do together. Their films carry and conduct traces of this belief. Relational films are co-created through careful and playful interrogations of the roles performed by the people and materials involved with the film’s production and reception: artists, subjects, passers-by, audiences, environments, ideas, and things. 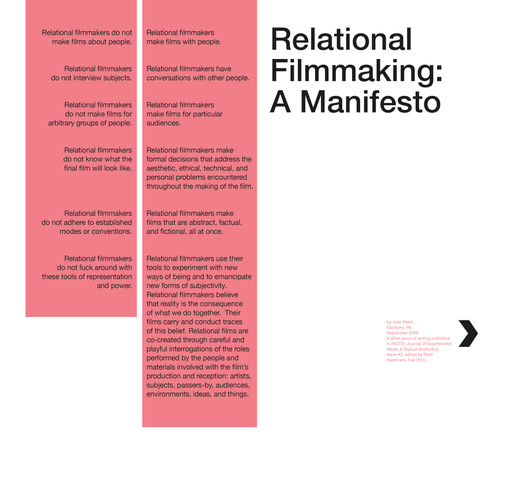 Relational Filmmaking: A Manifesto and its Explication
by Julie Perini